Watching celebrities on T.V. being confronted by involved family and friends in staged interventions makes for great theater. Watching these people detox in front of our eyes is gratifying; they have f.+++ed up lives too. We rejoice and feel better when they at the end are clean and sober. Their redemption is our salvation, we are all well again.

The reality is only about 40,000 people in the U.S. die from drug overdose each year. This includes not only deaths from the use of legal or illegal drugs but also poisoning from medically prescribed drugs. If we subtract these accidental poisonings, the figure is lower.

The symptoms of Major Depressive disorder are: 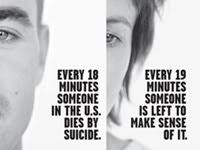 The symptoms of Major Depressive disorder are:

I’ve listed some of the symptoms above in red because most people who have no clue about anything else, can recognize these symptoms. While patients are in my waiting room, before I’ve even seen them, I can make the diagnosis by just noting these physical observations. Even my dog (a Chug) jumps on my bed when I’m over sleeping; she notices the changes in my behavior. If you notice these symptoms in any person you know and these symptoms have gone on for over 2 weeks, do an intervention. Get these people to their regular medical doctor ASAP. Most primary doctors can start treatment and make other arrangements that might be necessary. Yes, Major Depressive disorder is a medical illness that can be treated.

I’m sure you’ve recently heard to look for other symptoms of depression and suicidal intent like making a will, making a plan for suicide, etc, but come on, are you really going to ask your loved one “do you feel suicidal?” No, our own shame and horror keeps us from asking. God forbid, if they say yes. Focus on the above observable behaviors and behavioral isolation. This keeps our thoughts and conclusions out of the mix. It’s not so personal but you’ve saved a life.

Look around you folks, think intervention. Suicide just shouldn’t have to happen.

2 thoughts on “Intervention Everyone?”